We start with the origin of all life. The elixir of life that is water. With MY WATER BOTTLE. With each purchase of this high quality glass bottle, three (3) euros automatically go into the SANUS-PLANET-POOL.

The first projects and organizations that will received the funds collected have already been named.

"Acción Ecológica” is an organization in Ecuador that is deeply committed to advocacy for indigenous peoples and their rights, as the Amazon is currently being burned (for animal feed production, but also to drill for crude oil for the production of plastics and other items). The organization is extremely active, does educational work, holds demonstrations and projects around the topic of deforestation and environmental protection and human rights (protection of indigenous populations in the Amazon region). They are committed to ensuring that the rainforest does not fall victim to deforestation.

Currently this organization aims to form a commission for truth, justice and reconciliation that is made up of defenders from different fields.
This commission has the goal of permanently monitoring rights, tracking the different notices and conducting a regular review of the environmental surveys at the end of each government.

Children plant trees all over the world and work to replant the forests. The children are trained in special Academies to become ambassadors themselves and motivate others to plant trees. Currently, many trees are being planted in Yucatan, Mexico. Felix Finkbeiner was the founder of this organization and has already given lectures on this topic at the age of 8-9 years.

Under the motto "Planting trees for a better world", one tree should be planted for each euro. According to the "tree counter" at the organization, they have already planted 13.6 billion trees working with all of their ambassadors and the many children around the world, as well as people that registering through their tree counter. The goal is to plant one (1) billion trees under the project. Here a quarter of human-generated CO2 emissions could be absorbed, which would enable prosperity in the Global South. The organization also has its own academy where children train children so that they can also become ambassadors for climate justice. 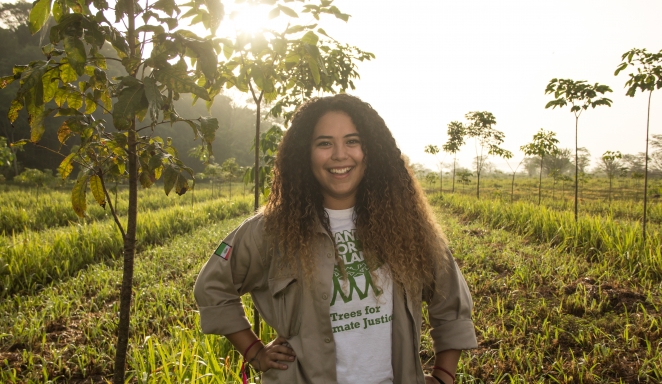 This project was launched by Madison Steward (Houth Conservationist of the Year 2017 in Australia). She's called "Sharkgirl" because she has gone diving with sharks since she was a teenager. Each year over 100 million sharks are slaughtered for their fins or their meat, are trapped in fishers' nets and die. Madison started this project in Indonesia to promote tourism in a fishing village, in which the people there could earn more than they do killing sharks and in the process also protect the oceans. She is involving the entire population and raising awareness of these issues among children.


Madison’s goal is to stop all the boats in this small fishing village in Indonesia from setting out to hunt sharks, by investing $100 a day - for seven (7) days a month, that is, a total of $700 per month. The number of sharks killed in each hunting trip is very high. With this money Madison manages to carry out various projects: she brings diving tourists to the village, from where they can go out to sea on the shark-fishing boats to watch sharks (instead of killing them), which leads even the fishermen to love these animals. Furthermore, Madison is also working with the local children to teach them to understand these animals and to explain how important they are for the sea and for all of us.